Beliefs lead to behaviors, and how leaders use consequences shapes both employee behaviors and beliefs. It also pointed out that consequences can be either positive or negative. Unfortunately, focusing just on consequences to change behaviors doesn’t enable the sort real change most leaders imagine when they set out to transform their culture. This is because individual values also play a huge role in how people behave. This article will help you understand the relationship between beliefs, values, and behavior and also give you some insight into why significant culture transformation efforts appear to progress so slowly.

In the context we are discussing here, a belief is the acceptance of a statement or claim as true.  Depending on the circumstances and the individuals involved, beliefs can develop quickly or slowly, and individual experience plays a large role in what one believes.  For example, employees working for a manager with an established track record of providing clear direction and holding workers accountable for their assignments are much more likely to believe what their manager says than those working for a manager who says one thing but then routinely does another.  Individual beliefs tend to be substantiated by facts, circumstances, and experience.  Because of this, beliefs can be changed by the introduction of new facts, changing circumstances, and evolving experience.

Values on the other hand are much more deeply rooted than beliefs.  Values reflect what one feels is important in their life.  At an individual level, values could include concepts such as caring, empathy, or trust, among many others.  At the organizational level, examples of values might include accountability, customer service, and safety.

Of course, it is certainly possible that personal and organizational values overlap or even become indistinguishable.  This common ground between organizational and personal values is where a leader has the opportunity to really change an organization’s culture because ultimately values are what define a person’s standards of behavior. Because culture is the collection of expectations and norms that determine how a group behaves, values and culture are closely related.

One Way to Change Behavior

Beliefs, behaviors, and consequences are related.  In this relationship, consequences first effect beliefs which then result in behavior change, as shown in figure 1.  The limitation with this approach to shaping behavior is that people only have to believe the consequences will have an impact on them to affect their behavior.  In other words, they don’t have to believe the “desired” behavior is truly appropriate.  To illustrate this point, consider a company that has a dress code policy designed to promote an image of professionalism and modesty by its employees.  Part of this policy specifies that short skirts and low-cut blouses are not permitted.  At this company works an entry-level employee who personally believes short skirts and tops are fine at work.  After all, they just reflect her personality and style. Despite this individual belief, she complies with the company’s dress code, because she knows her manager will send her home for the day if she shows up to work dressed in clothes disallowed by the policy.  In this case, the employee only complies with the established dress code to avoid the negative consequences of failing to do so.  If the policy were not enforced, she would happily come to work dressed in a manner the company considers unprofessional.

Relying primarily on consequences to shape behavior requires constant oversight and enforcement by management and supervisors.  You’ve certainly heard the saying “when the cat’s away, the mice will play.”  A manager who feels like she is always having to correct her workers on a simple policy like a dress code is likely overseeing employees who believe in the consequences she threatens, not the fundamental appropriateness of the behavior she is expecting from her team.

A Different Way to Change Behavior 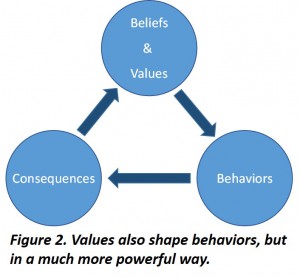 Values can be incorporated into the beliefs-behaviors-consequences relationship as shown in figure 2.  As shown in the figure, consequences can shape both beliefs and values, and it is true both beliefs and values lead to particular behaviors.  The critical point for a leader to understand when attempting to change the culture of their organization, is that focusing on values is a much more powerful lever than simply focusing on beliefs.  As I illustrated with the dress code example, people behave in a certain way all of the time because they fear consequences of behaving in the way they may really want.  When it comes to really changing organizational behavior, the leader’s job is to get people behaving in a certain way because they want to and it is important to them, not just because they fear the consequences for failing to do so.

With the appropriate application of consequences (and it’s important to reiterate here consequences can be positive or negative), beliefs and behaviors can be changed very quickly.  Just tell everyone they must start wearing a blue hat to work by Tuesday or they’ll be let go, and you’ll likely start seeing a lot of blue hats by Tuesday.  Change your mind and tell them it’s now red hats by next Wednesday, and sure enough your shop floors will be awash in red by the deadline.  You’re changing behaviors through consequences, and you are doing it quickly.  Unfortunately, it’s doubtful anyone knows the value of wearing one color hat instead of another.  And everyone probably thinks you’ve lost your mind.

When it comes to changing a person’s values, however, those sort of changes typically happen much slower, and therefore the time it takes to start influencing behavior can be much greater.  Let’s think back to our entry-level employee who did not like her company’s dress code policy, but complied with it anyway because she didn’t want to risk being sent home and missing a day of pay.  Fast forward a couple of years.  Because she is very talented and a tremendous asset to the company, she’s been promoted a few times.  She’s had some supervisory roles and was recently advanced into her first management position.  During her time with the company she also grew from understanding the “what” elements of policies to the “why.”  She now knows that the dress code was put in place because her company believes employee attire at work affects the company’s image.  As a supervisor and now a manager, she has seen that particular dynamic to be true many times.  She now spends part of her time as a manager explaining and enforcing the company dress code.  While she once disagreed with the policy, she now sees it as important to the company’s future success.  Her values have changed.  No one has to enforce the dress code with her.  She complies with the policy not because she has to (as when she first started), but because she thinks it is important.

How Beliefs and Values Relate to Culture

Remember our definition of culture: it’s the collection of expectations and norms that determine how a group behaves.  Beliefs beget behaviors, but so do values.  The manager whose employees follow procedures only when they are closely supervised is facing an uphill battle because his employees don’t value what he’s asking them to do.  They just believe they will get in trouble if they don’t comply.  A leader who is trying to change the culture of her company must focus on the values she is trying to instill to enable truly lasting change.  We’ve all seen it happen – as soon a leader moves on, a highly visible change effort falls by the wayside and things revert back to the old way of doing business.  This is usually because the focus of effort was on changing people’s behaviors not their values, or enough time was not devoted to the effort for it to become fully internalized.  Either way, the whole thing goes down in history as “just one more time someone said we were going to change the way we operate, but nothing really ever came of it.”  Changing what someone values – the things that are important to them – requires the leader to focus on why the changes are important, not just what the changes are.  This can take an enormous amount of effort and time.  But if you want the changes to truly take hold, they must be important to those on your team just like they are to you.

How are you approaching your change efforts?  Are you just telling people what they should do differently?  Does your team seem to undermine the changes and your plans every chance they get? Do you feel like the cat who knows the mice are playing while you are away?  If so, chances are you are focusing too much on consequences and beliefs and not on changing the values of your team.