GMCI | Where Do We Go From Here? 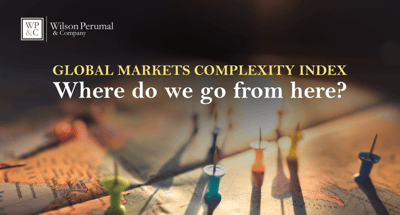 When companies plan geographic expansion, they usually look first to neighboring countries. This intuitive approach makes sense—particularly if there is shared language, culture, or level of economic development—but this strategy erroneously assumes geographic proximity equates to similar operating environments. This is frequently not the case and, if overlooked, can result in failed expansion attempts.

Wilson Perumal & Company’s Global Markets Complexity Index (GMCI) provides a new lens for assessing expansion opportunities by analyzing market, operational, and regulatory complexity to divide 83 countries into eight groups with similar complexity profiles. These groups represent the crux of the GMCI—current success in one country suggests the opportunity to leverage complexity management capabilities in other countries in the same group.

The GMCI map illustrates how geography alone is not a good indicator for expansion. Seven out of eight complexity groups are geographically dispersed.

Consider a company with established, successful operations in France looking to expand. A geographic view of expansion from France may lead the business to consider Germany, Spain, Belgium, and Italy. These could initially appear to be strong contenders with shared borders and languages, and similar consumer profiles. But taking a deeper look using the GMCI complexity-focused analysis reveals potential traps in some countries and uncovers unexpected opportunities elsewhere.

France is in GMCI Group 2 (Utility Players), a group defined by its generally low complexity (although not the lowest) and higher levels of regulatory ‘friction’. This friction makes doing business there more difficult than in Group 1 (MVPs) countries. Spain, Belgium, Ireland, Portugal, and Lithuania are all members of Group 2, with similar complexity profiles. The GMCI suggests that a company operating successfully in France has the skills and capabilities necessary to navigate the market, operational, and regulatory complexity in the other Group 2 countries. So, of the initial geographically-inspired list, Spain and Belgium make the cut, and Ireland, Portugal, and Lithuania, while not neighboring states, deserve consideration.

Other neighbors of France present a variety of challenges. In Italy, a Group 3 (Middle of the Pack) country, managing government favoritism and weak property rights would be new burdens to a company operating in France. Germany, on the other hand, is a Group 1 country with lower regulatory complexity than France. While this may make this a viable option for expansion, it is also a very competitive market. German companies do not have to dedicate as many resources to managing the market, operational, and especially regulatory complexity that French companies do. That leaves them free to focus on driving efficiency and product development, a potential advantage over French-based organizations.

The GMCI complexity profiles are designed to supplement, not replace, the due diligence required before launching into a new market. Our complexity-focused view cannot alone inform expansion plans. A big part of the equation is determining the value, or top-line opportunity, of entering into a new market. Such an assessment is highly industry- and company-specific. However, the potential revenue opportunity is frequently what companies already consider, while ignoring the potentially costly complexity of attaining it. By understanding the complexity of the markets in which a company already operates, you are uniquely equipped to identify countries that are the best bets for successful expansion, and to be clear-eyed about the capabilities necessary to thrive there.