Investing in companies that expand into emerging markets can be a rewarding move, but the results are often hit-or-miss, as evidenced by Dunkin’ Donuts’ recent departure from South Africa. Unanticipated challenges can undermine companies when they hang a shingle in an unfamiliar market. In the case of Dunkin' Donuts, lack of consumer brand recognition, rigid pricing structure, and the state of the economy are all cited as elements of failure.

This was a significant retreat for the brand that arrived in South Africa with fanfare just a few years ago. It is also another nail in the coffin for investment strategies based on catchy acronyms—in this case, the BRICS (Brazil, Russia, India, China, South Africa).

Following the successful growth of the economies known as the Asian Tigers (Hong Kong, Singapore, South Korea, and Taiwan), the investment community thirsted for the next big development story. First came the BRIC countries, later modified to BRICS with the addition of South Africa. As that story fizzled, attention turned to the MINTs: Mexico, Indonesia, Nigeria, and Turkey.

But as investment strategies, the results have been mixed—and the reason is complexity.

Consider the BRICS scorecard. There have been some success stories, notably the growth of China’s manufacturing sector and India’s service sector. But even here, there is fragility. India’s service sector is vulnerable to automation and increasing wages threaten China’s reputation as the predictable manufacturing base. Meanwhile, Brazil and South Africa have been impacted by political instability and lower commodity prices; Russia has taken a hit due to lower oil prices; and corruption remains an issue across the group.

The bottom line is while the BRICS share some high-level characteristics—all big countries with large populations, together representing nearly a quarter of global GDP—these similarities say nothing about their divergent development paths or the unique challenges companies face doing business in these diverse markets. The complexity of these countries—the market, operational, and regulatory complexity—has not been factored into the equation. Overlooking this key element is at the core of many failed expansions.

To close this gap, WP&C created the Global Markets Complexity Index (GMCI), developed for The Wall Street Journal. The GMCI assesses 83 countries across 31 factors to build a profile of the level and type of complexity that exists in each market. The countries are classified into eight distinct groupings, from Group 1 “MVPs” (U.S., U.K., Australia, etc.) to Group 8 “Only the Brave” (Nigeria, Pakistan, Bangladesh, etc.)

From an investor perspective, the GMCI offers a unique approach for assessing and understanding the complexity of a given market, enabling more nuanced investment strategies.

Putting the BRICS through the lens of the GMCI, the notional uniformity quickly falls apart. They are all complex, but in different ways. Brazil, Russia and China all rank as Group 4 countries—the “Walled Gardens”—with attractive markets, but access is impeded by high levels of operational and regulatory complexity.

India and South Africa, meanwhile, rank as Group 6 countries, “The Builders.” These are countries on the march toward development, but with complex markets to navigate. Customers in these markets are economically, culturally, and geographically diverse, making them hard to reach and convert to sale. 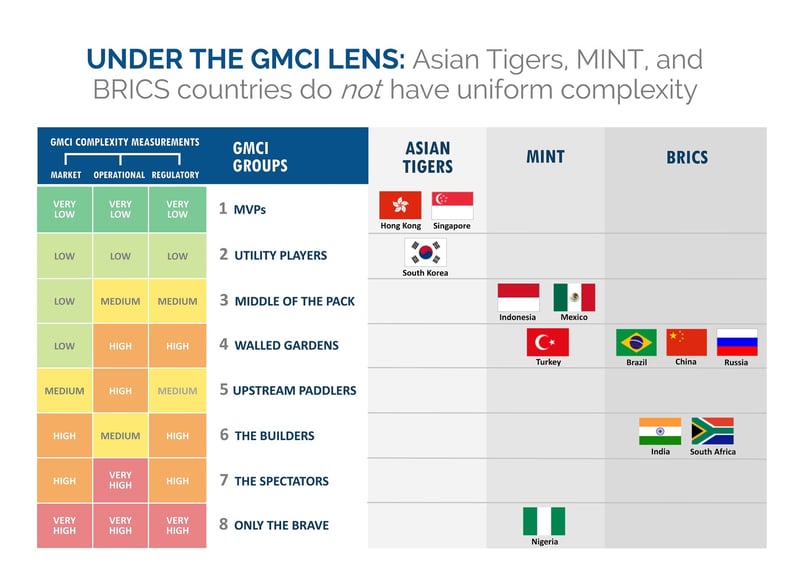 An evaluation of the MINTs finds even more diversity, with four nations straddling three GMCI groups. But the point is the same: no matter the intrinsic growth opportunity of a market, without understanding and considering the complexity of that market, you’re likely to run into trouble.

The solution for investors is to go beyond the acronym, perform due diligence, understand the complexity of the markets, and ask a different set of questions: