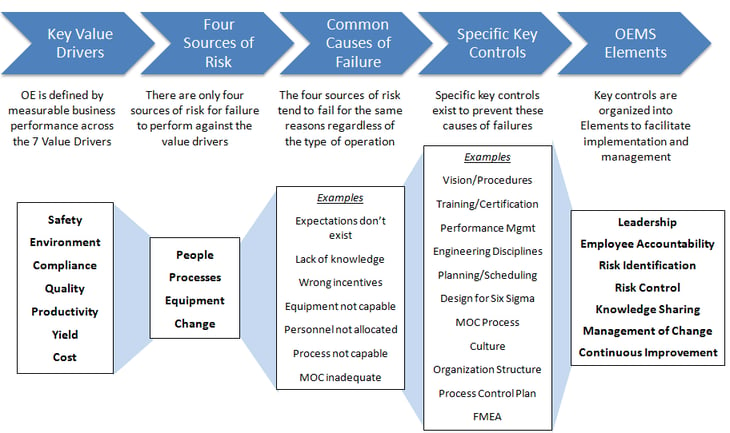 There are only four sources of operational risk (people, processes, equipment and unmanaged change), and there is only a finite number of ways in which those sources of risk can fail, we can now address how to prevent those failures or lessen their impacts through the implementation of Key Controls. Once the Causes of Failure are identified and understood, Key Controls can be developed to either preventing the causes of failure from occurring or lessen the impact if they do occur. The diagram below offers an example of how some Key Controls can be applied to mitigate the reasons that People fail to perform as expected.  A similar exercise can be done with Process, Equipment, and Change. 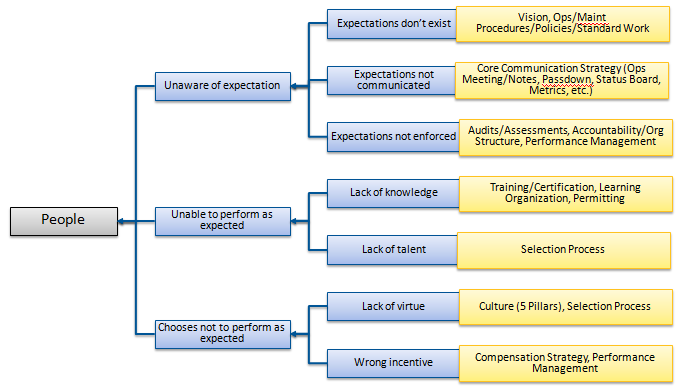 A good way of thinking about the role of key controls is to think through an example from our everyday lives: driving our cars. Potentially, driving a 2-ton car 65mph down a road with dozens of other cars & pedestrians and countless distractions could be a very dangerous situation. But thanks to a number of key controls, the act of driving to work is actually quite mundane. There are Key Controls in place to prevent drivers from running in to each other: brake lights let you know the car in front of you is slowing down, turn signals let you know a car will be turning, lane markers ensure drivers follow an expected route, speed limits make sure people drive at a safe speed, traction control helps drivers maintain control on slippery pavement, etc.  And if a failure (a crash) does occur, there are even more Key Controls in place to mitigate the impact of that failure: seatbelts, airbags, car structures designed to protect the occupant compartment, automated systems to call 911 in case of airbag deployment, etc. Over the past 100+ years of automotive development, Key Controls have been developed to transform what, on the surface, seems like an incredibly dangerous activity in to one that we don’t think twice about.

Key Controls can be identified and put in place in a similar fashion within a company's operations. Whether it is a communications plan, 6-Sigma/Lean, standard work, cultural shifts or any other control, the purpose of each is the prevent a failure that will ultimately impact the company's performance. And it is important to remember that one control may help address several Causes of Failure, or one Cause of Failure may require multiple Key Controls to manage.

The number of Key Controls can be overwhelming, especially when trying to communicate at a high-level or across an organization. That is why it is helpful to organize those Key Controls in to 7 Elements and an Operational Excellence Management System. First of all, remembering and managing 7 Elements is much easier and more useful than doing so with hundreds of key controls. Secondly, the 7 Elements create a common language that facilitates communication and learning between employees, between leadership and employees, between leaders and from site to site. And finally, the 7 Elements encourage systems thinking and drive proactive risk management while forcing problems to be addressed in relation to one another and not in isolation. It is important to remember that the 7 Elements are interrelated and a key to the successful implementation of an OEMS is communication and coordination between Elements.