Changing culture can be a difficult task that requires significant leadership will and commitment.  The journey to Operational Discipline will look different for every company, depending on its starting point.  However, our work with multiple companies in high risk industries such as Oil & Gas indicates there are several necessary steps that should be included in your plan for culture change.

Step 1: Align Leadership on the Pillars of Operational Discipline

Make no mistake, creating a culture of Operational Discipline, and sustaining that culture over a long period of time, starts at the top of the company.  Getting the company’s top executives to align on a common language for talking about Operational Discipline is the essential first step.  They must not only agree on the words that are used to describe each of the Pillars, but they must align on the approach for changing the culture.  One mistake often made is softening the words used to describe Operational Discipline, or changing them to so that they sound more like phrases or words that the organization is already familiar with.  For instance, many executives initially shy away from using words like “Formality” because they believe it will sound too foreign to their employees.  However, this is exactly what you want when introducing a new culture.  If the words don’t sound different and get the attention of employees, they are less likely to recognize that they are being asked to behave differently.

Step 2: Create the Case for Change

Once top executives have aligned on the words and the approach, they must create the case for change within the organization.  They must communicate to the workforce why adopting a culture of Operational Discipline is essential for success of the company.  Of course, this requires that they truly believe this themselves, and that they personally demonstrate the new behaviors they expect to see.  However, this does not mean that anyone should expect them to perfectly demonstrate these behaviors.  Rather, leaders should acknowledge to employees that they need to make changes to their own behaviors as well.  Furthermore, consistent with Forceful Watch Team Backup, they should ask employees to point out when their behaviors aren’t consistent with Operational Discipline.

We have found that case studies can be a very effective tool for creating the case for change.  Specifically, case studies that discuss the role leadership and culture played in major incidents can be very powerful illustrations of the need for Operational Discipline.  Incorporating activities that challenge employees to reflect on their own behaviors, relative to the behaviors of leaders in the case study, can help them recognize the possibility that catastrophic events can happen to them.

Step 3: Internalize the 5 Pillars and the Necessary Changes in Behaviors

Conducting training sessions on Operational Discipline, although a necessary and important first step in introducing the 5 Pillars, will not cause employees to internalize the behavior changes that they need to make.  Rather, this takes personal interaction and dialogue between leaders and their direct reports.  This interaction should occur through both one-on-one conversations with employees, as well as during observations of employees performing work.  It is essential that leaders begin recognizing when employees’ behaviors are inconsistent with the 5 Pillars, and correct them on the spot in a compassionate, yet clear and consistent way.

Starting at the top of the organization, each leader should sit down with his or her direct reports and have a one-on-one discussion about what the 5 Pillars look like in their daily activities.  We have found a tool that we call the Right/Wrong Framework to be very helpful in facilitating this conversation.  Using this tool, leaders can explore tasks or activities that the employee performs, and compare and contrast different behaviors that are consistent and inconsistent with each of the Pillars. 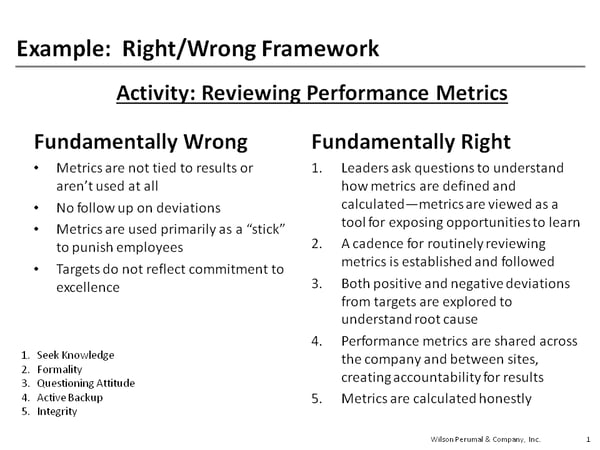 While personal interactions between leaders and employees are critical for initiating the culture change, integrating the 5 Pillars into the company’s existing Management System Processes is essential for ensuring the culture change is sustained.  The following are some examples of how the 5 Pillars should be incorporated in to existing processes:

It is not only important that these 4 steps be applied throughout the organization from the top-down, but also that they be performed in order.  Many organizations have attempted to begin modifying their performance management systems (Step 4) before ensuring that employees internalize the required behaviors (Step 3).  We have seen this result in myriad problems as employees attempt to understand the new performance management system requirements, without really understanding the expected behaviors.